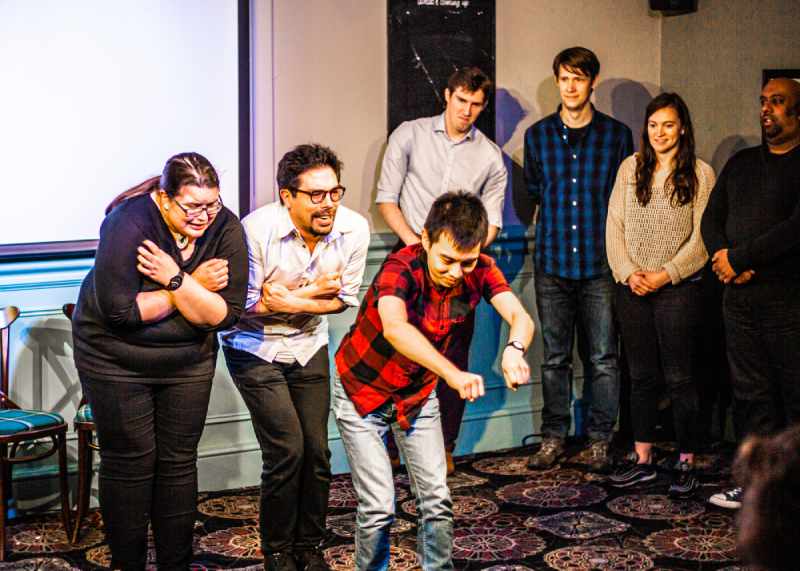 Level: Advanced Tired of jumping from course to course? Looking to build an ensemble and perform with a stable set of improvisers? Our teaching teams

Tired of jumping from course to course? Looking to build an ensemble and perform with a stable set of improvisers? Our teaching teams are a 12 week combination of class and rehearsal, each culminating in three performances on Friday nights via the Nursery Facebook page.

Over a twelve-week rehearsal/teaching period, you will work on core skills, rehearse a show and receive coaching and personal feedback. Sessions will balance tuition with experimentation. Your shows may not end up being what you initially thought….

Our teams will be as follows:

Teaching teams are created by audition and commitments are by season of twelve weeks.  At the end of this time, participants will be invited to carry on and, if necessary, new auditions held. Coaches may change from season to season.

Auditions will be run by two Nursery/Maydays teachers. Decisions will be final and we are sorry to say we will not be able to provide individual feedback. If you wish to apply, please click on the Audition Form button to express your interest and tell us about your experience.

Advanced (3 years +)  This is our highest level of class. These classes are recommended for improvisers who are regularly rehearsing and performing with a team.

Katy Schutte trained at Second City and iO Chicago as well as with teachers from Annoyance, UCB and more. She is a Funny Women finalist and winner of the Brighton Festival Fringe Best Comedy Show award.

Katy has performed with the Maydays for 13 years, spent over a decade as half of the two-woman longform show Katy and Rach, plays with sci-fi improv team Project2 and in the Destination podcast. Katy coaches longform teams and leads workshops in England, Europe and the States. She has toured with Fluxx, improvised musicals with The Maydays, Music Box and Baby Wants Candy and notably guested in the London and Liverpool Improvathons, Grand Theft Impro, Whirled News Tonight, The Armando Diaz Experience and Messing with a Friend.

Katy is also a sketch comedian, actor, writer and theatre-maker. She directed The Watery Journey of Nereus Pike, wrote and starred in Who Ya Gonna Call? the Ghostbusters fan-sical, is one of the Knightmare Live team and is currently performing her solo comedy hour Schutte the Unromantic.