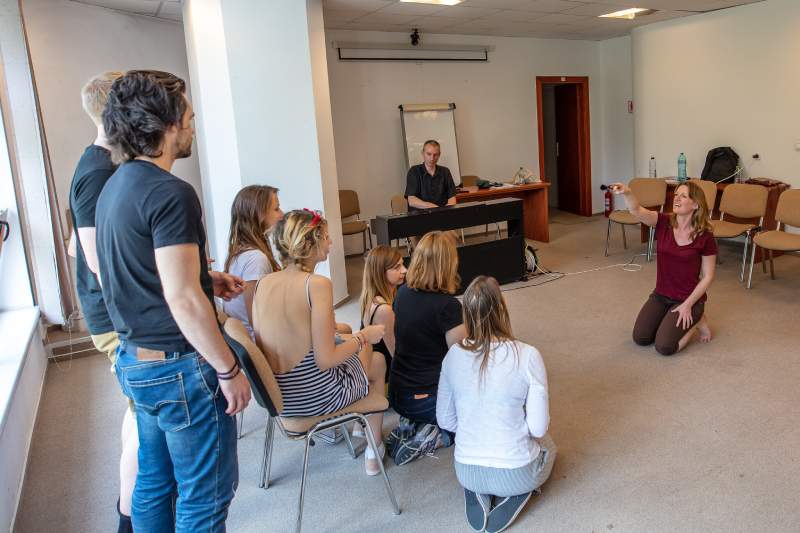 Level: intermediate In this online musical longform course you’ll have 6 weeks to dip your toes in the water of improvising musicals. Building on the

In this online musical longform course you’ll have 6 weeks to dip your toes in the water of improvising musicals. Building on the beginner’s musical course you will explore more song structures and ways of using music and singing in your improv scenes. The emphasis is slightly more towards scenic and longform elements of musical improv

Liz Peters trained as an actress at Mountview Academy of Theatre Arts and has worked extensively on stage and screen. She was nominated Best Female Performer at Brighton Fringe for Toybox, a musical comedy she wrote and produced, and has worked with British comedy institutions Newsrevue and The Treason Show, as well as in films, commercials and immersive theatre.

Liz travels the world performing and teaching improvisation and is part of Ohana – The European Improvisers Project. She is the creator and host of Unplanned Cabaret, performs with The Concept, The Bumper Blyton Improvised Adventure and regularly guests in other productions.

In addition to performing, Liz is a certified Embodied Facilitator and coaches people to have more impact and feel at ease in the spotlight. On her YouTube channel, ‘Bonafide Human Club’ Liz shares tips from the fields of improvisation and embodiment to help people enjoy life more.

Joe Samuel is the Director and Musical Director of The Maydays. He is a classically trained pianist and violinist and is one of only a handful of professional improviser musicians in the world. He has directed and played for a baffling array of improv troupes both in the UK and across Europe as well, as playing at IO in Chicago and being the musical director of Improv Festivals in Barcelona, Poland, Romania, Finland, Dublin and of course at the Maydays own festival.