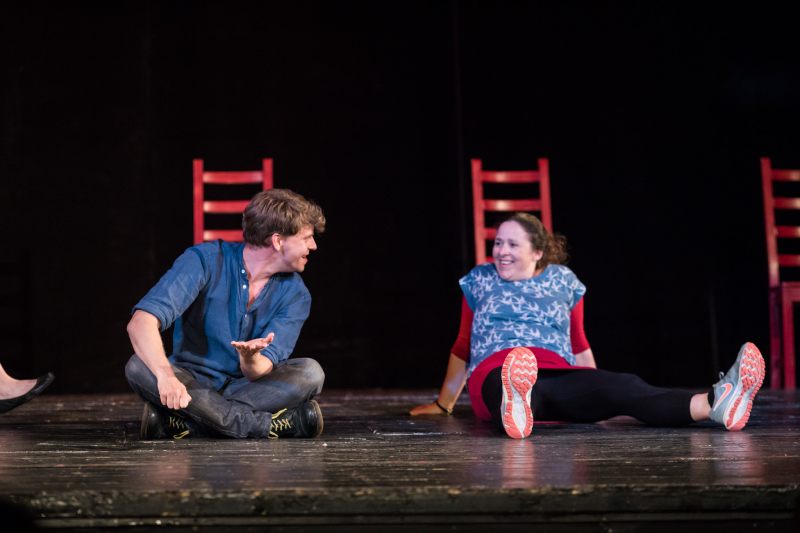 Screenwriting guru Syd Field famously said that all drama is conflict. But what if he were wrong? What happens when our characters just 100% agree with each other, delight in each other’s company and spur each other on to greater heights of absurdity and emotional expression? In this workshop, you will play with characters that are so similar it is hard to tell them apart. You will find the joy and freedom in using agreement to explore and unpack characters familiar and absurd, finding the support and freedom in being just like two peas in a pod.

Jen trained at ACT Brighton and now teaches there on a regular basis. Her credits include dreamthinkspeak (Underground) and Fringe-first nominated Bite-size Plays. She has toured with The Foundry Group and played Ero in The Widow’s Tears for the Shakespeare’s Globe ‘Read Not Dead’ series. She is an actor, voiceover artist, writer and teacher, having worked with the BAFTA nominated Treason Show Productions and can be seen as a hula-hooping, crash-helmet-wearing starlet walkabout act for Twisted Dreams at various festivals. As an improviser, she has toured with Fluxx, performs with Impromptu Shakespeare, plays two-person improv (Two Seats Four Cheeks) with Lloydie James Lloyd and once won £2.38 during an ‘improv-off’ in a Ken Campbell workshop. She has trained at Secondcity and Annoyance, teaches Improv for Creative Writing and has two writing projects on the go: a sitcom pilot and a one-woman show about an SF writer. Her recent fringe runs in 2019, “Tiptree: No-one else’s damn secret but my own” have been a smash, with 5-star reviews pouring in from audiences, so yeah, she’s busy.