What Severus Snape taught me about improvised narrative 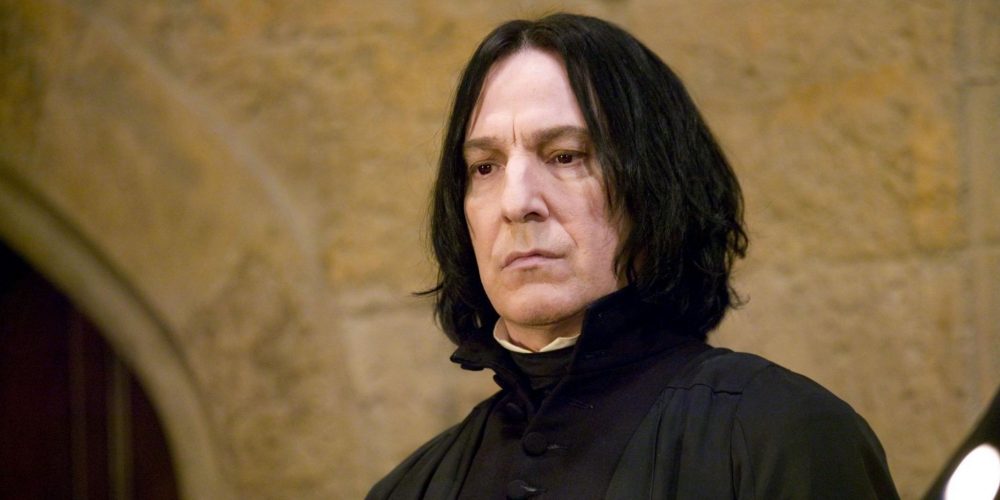 30 Jul What Severus Snape taught me about improvised narrative

So Magicked, our homage to and deconstruction of the world of Harry Potter closed out the season a couple of Saturdays back. It involved a dementor dreaming of owning a Volvo and Dumbledore getting a job as a tour guide, while Ron spent twenty years inside a board game and went a tiny bit colonel Kurtz. It was funny, gentle and with just enough narrative to justify its own existence.

It was just about a Harry Potter show. I think the boy who lived appeared twice in the entire run. Once to grab a piece of toast in the kitchen of the Burrow, and once to get killed by a lightning storm. For copyright and paranoia reasons (and because he is not, to be honest, a very interesting character), we mostly left him out.

Mostly the show was about Snape. Snape having a midlife crisis, Snape falling in love with someone called Nape, a temporal paradox leading to a eleven Snapes putting their powers together like a lank-haired, nasal Ghostbusters. Snape became a deeper, richer character each week, talking slower and more wisely, gaining the wisdom of Dumbledore and the emotional range of Hagrid. We all, it turned out, loved Snape.

I have now directed two ‘narrative’ shows (this and Impromptu Shakespeare), and in both of them the commas were/are firmly inverted (inevitable plug for Impromptu in Edinburgh: the Big Room, Just the Tonic at the Caves, 2-26th August). I both love and hate working in this way, as a genre choice can be very productive and stimulating, but it can also be restrictive. We had a great time in the first few rehearsals making scenes that opened up unseen but logical parts of the Potterverse, but those jokes are finite. In loves Crabbe and Goyle as Rosencrantz and Guildenstern, bemoaning that they are minor characters in somebody else’s story, but you can only do that once.

Which got me thinking about what a show is for. A show is a brand, of course, but it also a container into which we put scenes, a way of linking them together and bringing one out of another. As newer groups graduate from a class and have (or steal – no judgement here) an idea for a show they want to do, too often it feels like the show conquers all. We’re doing a buddy-cop movie, or an improvised Love Island, so what are the scene-units that we need to build this? How do we make the story/structure/form work? What does it need?

This is, I believe, completely the wrong way round. Or, more accurately, the wrong thing to have in your mind when you are improvising. If the improviser is trying to use the scene to build the show, the point of focus is in the imaginary and/or the future (which is, so far, imaginary). That’s hardly a good place to start from when improvising.

Try it this way round. You remember the freewheeling, delightful and delighted running-down-the-hill feeling when you started improvising? That you were either going to fall flat on your face or maybe, just maybe, when you got to the bottom, you would Peter Pan it over the trees? That’s not just how you start out improvising, to be discarded when you become an improv-adult, that’s how we want to always feel. That is the simplicity and flow of being present with the process, whether it be bunny-bunny or a tricksy narrative.

And the show must serve that, otherwise it has no business existing. Don’t get me wrong, sometimes you have to work a little bit to get the feeling of the show in your bones. You have to do your reps, go to the improv gym, do it again and again. But there’s just always a danger that our protestant brains will use their work = value assumption to trick us out of fun. Just as in Magicked Harry was mostly there to serve Snape, the show must always serve the scene.