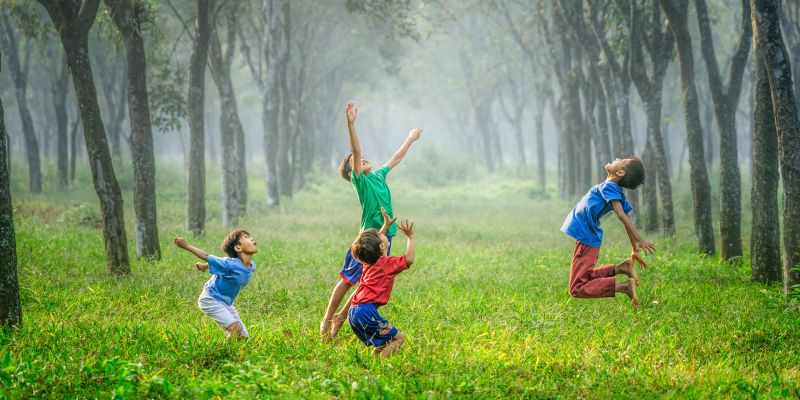 Having shipped all of the things the Nursery owns off to a storage location in Bermondsey, the team decided it was time for a nice outing. Hey (said Harry), there’s an exhibition on at the Wellcome collection about play. We should go. A group of improvisers heading to an exhibition about play might seem like a bit of a busman’s holiday (shouldn’t we be off to see some austere sculpture?), but it was right next to the ill-fated Nursery Studios, which seemed appropriate, so off we went.

The exhibition’s central thesis is explained on the wall right as you some in. Firstly, it mentions that play is “fun”. Which seems very reasonable, if perhaps circular. “Philosophers and educators (it then argues) have long argued for the value of play in education.” As an improv teacher, nothing I am going to disagree with there. “Play (it goes on) is also important in providing and protecting emotional wellbeing”. Again, I’ll go for that. Play is therapeutic without being therapy, as discussed a couple of weeks ago. Three functions of play: fun, learning and emotional growth. I will come back to this later.

The first thing you see as you come into the exhibition is a short film where children are interviewed about play. They are asked how it feels and how and why they like to play and how they would feel if they were never allowed to play again? They would be sad, they say. They are from a primary school just up the way and it is somehow delightful that you might walk past one of them in the street coming out of the exhibition. Like a very niche celebrity. They are also asked if grown ups should be allowed to play and they say yes, because all of their jobs are so hard and stressful. Fair point. This film is a highlight of the exhibition, and almost totally overshadows the next exhibit, which is of monkey putting a rock on his head.

So before I sound like a grouch, there is a lot of lovely stuff in the exhibition. The century-old ‘gifts’ created by Frober as part of the Kindergarten movement have a lovely woody tactility to them, and the pictures of kids playing in war zones are beautiful. There is some very interesting stuff about the adventure playground movement (I didn’t know it was a movement either), some very amusing public service films encouraging parents not to protect their kids too much, and an astonishing marble sculpture of some furniture under a sheet. I still don’t completely believe it is marble. There is a very funny Barbie and GI Joe exhibit (which I won’t ruin), and some dolls remodelled to have disabilities. There is even a video of a guy talking very seriously about the LARP-influenced sculptures he makes and a few of his sculptures. Heavy foam-y things that you can pick up and play with. You see, play is even possible for adults! (With an apparent lack of irony, there is a sign on the wall next to the sculptures saying “please do not climb on the wall”. Play, but only inside the set boundaries.)

Which brings me to my biggest problem with the exhibition. Where are the adults? I don’t think there is a single photo or video of an adult playing in the whole place. There are diagrams of a city where play was supposed to be central to the way life was lived, but that’s about as close as it gets. Which would be fine if this were an exhibition of play for children, or more accurately play for children in the last hundred years. But it’s not. The advertising copy asks “Why do we play? How important is it for all of us, young or old? What does it mean to play well? We invite you to consider the impact of play in our lives” (Italics mine). And then answers the question by neatly deleting adults from it. The implicit message being that even when we are discussing how play is for everyone, play is just for kids. When I was there, the only people anywhere near the sculptures you could play with were some toddlers too weak to lift them. The adults looked at them sideways like it might be a trick.

So let’s return to the three meanings of play that we saw by the door. Fun, education and emotional health. I don’t disagree with any of them, but I think separating them out like that misses the crucial connection between them. Play enables us to make simplified models of the world in which we can theorise, test and improve our knowledge of and power in it. Children do it all the time, but adults are deleted from the process, and those games which we adults play tend to be succeed-or-fail, zero-sum competitions. Play (which is different from a game) is the joyful gaining of insight into and power over the world through simplified models. All three of the functions of play ae the same thing from different angles. And separating it out into three separate functions diminishes it with a surgeon’s knife.

And while we are on the subject, there is a hilarious irony to a room full of toys, nearly all of which are behind glass. I found myself pawing impotently at the ‘gifts’ I could reach and my fingers twitching at the lego (which means ‘play well’ in Danish. You’re welcome). I am fully aware that this is billed as exhibition about, not an opportunity to, play, but it is almost comical that there is not even a bucket of lego in the place.

In the end, I am very glad this exhibition exists. Playfulness is very zeigeist-y at the moment. Every process or meeting has to harness the power of play, and I am glad that a venerable old institution like the Wellcome collection has taken it seriously. It’s just a shame that it still presents it as a way for kids to learn, not a way for adults to become themselves more fully. It reinforces the archaic message that play is for kids and that’s that.

To finish, here is a lovely quote from architect Aldo Van Eyck. I think it gets to the heart of the matter.

“You know what happens after a heavy snow storm? The child takes over – he is temporarily lord of the city. You see him darting in every direction collecting snow off frozen automobiles. A great trick of the skies, this.”

Play Well runs until the 8th of March, 2020, with free admission.