Mount Olymprov, or why we should all be a little more Jill Bernard 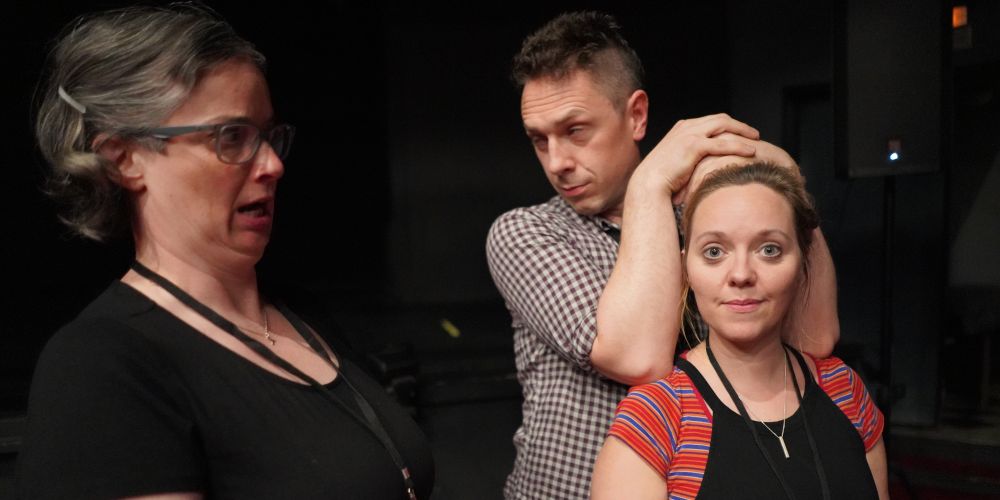 19 Jun Mount Olymprov, or why we should all be a little more Jill Bernard

Mount Olymprov is a pretty big festival by European standards. The 300 seat auditorium is full every night and most workshops sell out pretty much instantly. This is partly because of razor sharp organisation and partly because of the talent on show there. There are many many improvisers and teams that performed there this year I could write blogs about, but this one is about Jill Bernard, and why we should all be a little bit more like her. It could easily have been about any one of twenty other people. Just not Mico Pugliares, because I already blogged about him.

I don’t know how old Jill Bernard is, but she has been performing ComedySportz since 1993, so let’s just say she knows what she is doing. But despite the three decades, she has absolutely no cynicism. She is constantly smiling and squealing in excitement (and a range of other emotions). She has no poker face. Jill is irrepressibly energetic, loud and very very funny. She moved from Chicago to Minneapolis a long time ago in order that (she once told me) she can always get the last piece of donut from the plate. She is an award winning solo improviser (yep, there are awards for that) and has performed everywhere. Too many places for me to bother listing here, but almost in every American state. Her signature show is drum machine, a solo show where an audience member’s day and life are reimagined as a sweeping historical musical. If that sounds plainly ridiculous, then you are right. It absolutely is. It is also wonderful to watch. At Mount Olymprov, her show featured a medieval rat too feeble to spread the plague and the last monk left alive trying to preserve the English language. In the end, the (mimed) rat was tap dancing on the monk’s hand.

One of the things about Jill that makes her so damned watchable is that she appears to have absolutely no shame, fear or embarrassment. Further than that, she is excited by every improv scene she sees. She will always step forward with a twinkle in her eye and find the nugget in it. It is a founding principle of her improv. In classes she describes it as not ‘auditioning the scene’. Don’t stand on the side deciding if it is good enough for you to be in, throw yourself in with an open heart and a surety that there is good in everything, everyone and every scene and all you have to do is find it. Something will always work out, and if it doesn’t that’s OK too.

But Jill also does not take any bullshit. She is opinionated, forthright and clear in what she thinks. She believes in diversity in improv, and having smart and compassionate boundary conversations.And she is doing her part to make those things happen. She has strong opinions on what you can and can’t play in what context and supports and listens to those who disagree with her. She has deep empathy.

This is a very hard balance to strike. In improv it can be easy to feel that one cannot speak one’s mind and you have to love everything, or that there are draconian rules of content that have to be memorised and followed*. That maybe it is not in the spirit of yes-and to be honest about the show we just saw or did. But a total lack of criticism can create sterile mono-cultures where everyone is thinking one thing and saying another.

One of Jill’s other teaching phrases is that everybody is their own improv school and please, let me make this clear, I am not saying improvise like Jill Bernard (though you could do worse). Make the moves you are going to make, be the improviser that you are becoming and liberate your own tap dancing rat. What I am encouraging you to do is this: practise both unfettered and genuine enthusiasm and also speaking and listening clearly. Balancing it can be hard, but it is liberating and morally correct.

What I am encouraging you to is this: be a little bit more Jill Bernard.

Oh, and go to Mount Olymprov. Those guys know what they are doing.

Jill Bernard is a director of HUGE Theatre, which is currently crowdfunding for a new building. If you can, we would encourage you to make a donation, which you can read all about by clicking here.

*To be clear, I am not lamenting the good old days before comedy when you could just say what you wanted and nearly everybody in comedy and theatre looked and sounded the same. There were no good old days.