I got back from Edinburgh about a week ago. And a lot of people have asked me the same thing: ‘How was it?’. A perfectly reasonable question on the face of it, but every time I hear it, it seems to make as much sense as ‘How much time is left in North?’ or ‘What is the best reason for windmills?’. It is grammatically correct, but impossible to answer. The Edinburgh Fringe is so massive, strange and complex. There were the astonishing highs, some at times you would never expect, the horrible moments when you realise you’ve messed something up and, oddly, quite a few moments of boredom. I don’t have any kids, but I feel like ‘How is having kids’ would be an equivalent. You just can’t answer that question in a sentence. It’s too rich an experience.

National newspapers seem to see the Fringe as an excuse for lists. Top comedy shows to see, best jokes of the Fringe, weirdest hats in cabaret, best accents in a Chekhov. It may be that a list is the only possible way to answer a question about the Fringe. So here is my list of how Edinburgh was. A list of moments which typified what the experience felt like. I missed five times as many as I included, but here goes. 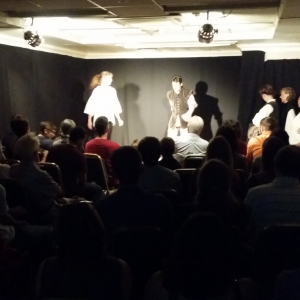 1. The first show at the Nursery venue. Impromptu Shakespeare (left). After running around gathering information, wood and trying to get the (very basic) sound and lighting kit to work (harder than you’d think), and building a venue, the first show started. And we remembered, ‘Oh, yes, people making things up and audiences having a lovely time, that’s what we were doing it for.’ I may have cried a tiny bit, sitting at the back in the dark behind the sound desk.

2. Flyering flyering flyering. Edinburgh is the only place that I have been to where hand-to-hand flyering actually works. Some people are polite, some indifferent and some downright rude. As I approached one guy at the half price hut asking if they were looking for a show for the afternoon (they did have a programme in hand and were looking at the big screens), he glared at me and growled ‘Go away’. Then held eye contact. For a very. Long. Time. 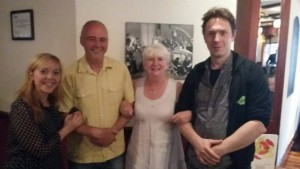 Penny and Steve, who popped in to a show all about them

3. Ten Thousand Million Love Stories. One of the shows we based on the story of Penny and Steve (right). In fact, by a combination of accident and design, the show was mostly playing out their courtship. Their daughter was in a show across town and they took a chance on a show, watched their story played out, had a very nice time and gave us a hug afterwards. Only in Edinburgh.

4. Rain. It didn’t rain much this year, but the twice or so it did, it really went for it. One night at eleven I was standing outside the Nursery venue with Rhiannon Vivian and Colin Baker, staring at splashing, full-dropped rain and being really glad it had happened in the evening, after any running around or flyering was finished. We took a taxi home. 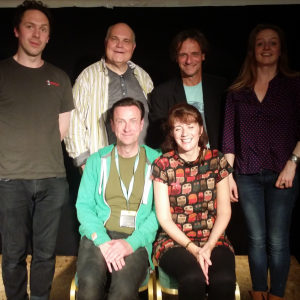 Some of my heroes

5. Guest Speaker. I can’t remember how it happened, but one of the shows at the Nursery featured a number of my childhood heroes, including Lee Simpson, Richard Vranch, Suki Webster and Mike McShane (left, with me and Judith Amsenga). Sitting at the bar table before the show I had to keep pinching myself. The next day I flyered Eddie Izard. He was very friendly.

6. A bath. Due to bad planning and the unrealistic expectation that my thirty-three year old body can do just as much as it used to, I didn’t really have a day off, but I did have a half a one. So that afternoon I had a bath, ate a salad and watched an episode of Community I somehow had never seen before. When I showed up at the Nursery at five o’clock, I felt like I had taken a three week yoga retreat in Bali.

7. The Nursery presents. Every night to finish the programming, we had a show with two or more guest acts and an audience jam. It was the least predictable show we had, with audiences varying from six to forty-five, shows made from newspaper, songs polished and shambolic, stories and scenes from the experienced and those who had never been in front of an audience before. And Nathan Keates. Who was there every time but two I think. With an ever-shifting line up and the fear that one day just no one would turn up, it was a lot of work, but also a lot of fun.

8. Maydays Unplugged. One the last day of the Fringe, our second show of the day had an audience of four. In any ‘normal’ situation, this might have felt like a hard room to play, but in the last few moments of the Fringe, everyone drunk on endless shows and the prospect of their own beds, I think we all did some of the best improv we had all Fringe. Free-wheeling, odd and playful, the audience laughed the whole way through and coming offstage I felt like I had swam in the sea. 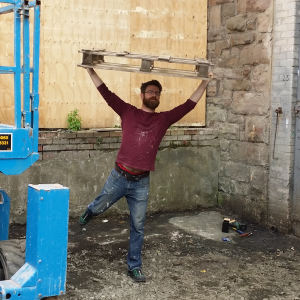 9. The Waverley Arches. Sure, they weren’t ready in time, and they were dark and damp and one of them was gutted by fire in week two. Sure there was a mad guy called Stuart who was always there and pretty annoying, but on the last night the Nursery team and the Freestival team danced to terrible eighties soft rock until we all collapsed and went home. We played ‘We Built this City’ at least three times and everybody fell over dancing and it felt like the best type of house party.

10. Fireworks. I think the fireworks are normally after I leave Edinburgh because the International and Fringe festivals don’t normally finish at the same time, but this year I was there. Now I LOVE fireworks, like love love love them. They create the same feeling of community as improv does, plus they’re outside and set to ridiculous, bombastic music. Sitting in Prince’s Street Gardens with Julia Miller-Bakewell and Judith Amsenga, I got a sore neck and said ‘wow’ over and over again and meant it.

So that was my Fringe. Exhausting, inspiring, refreshing, alien, but oh so familiar, seeming both endless and like it passed in a flash. It’s a totally unique experience and a bubble away from the world. Will there be a Nursery venue there next year? We don’t know. We have barely caught up on sleep and vegetable consumption in the week we’ve been back, but I reckon there’s a good chance.

Right, we have a theatre to programme and fill. Best get on with that now.