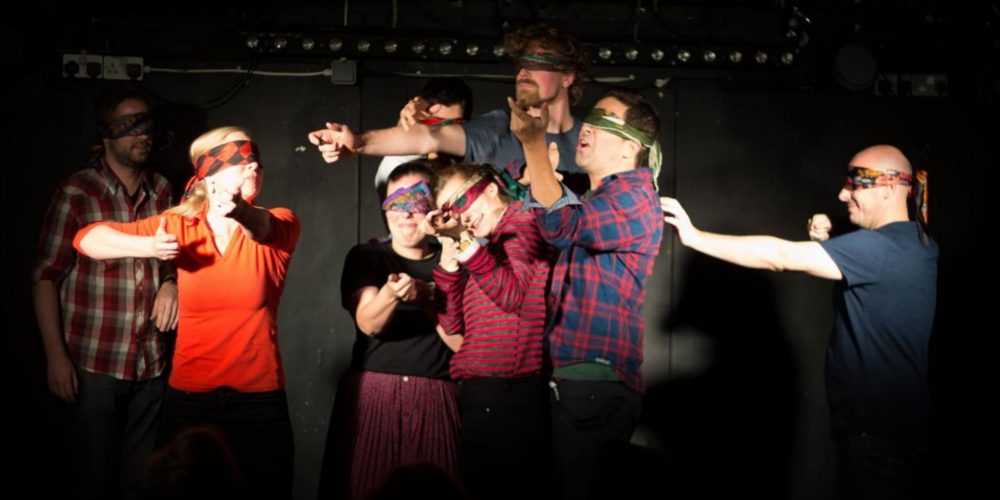 Running festivals is a question of how much planning you can do and what happens when that planning runs up against the things you can’t predict. The unknown unknowns. So let us just say that the day before and the first day of the festival were challenging. During that time, as some of you will know, Scott and Drew (Convoy) both had to cancel their trips for unavoidable reasons, the website went down and there were significant problems with the heating, lift and plumbing of Capital house. Plus, there was a power problem with the Eurostar meaning we did not know whether Carpe Haute would be here for their class until the last moment.

In the end, of course, improvisers improvised (shout out to C3Something and their obsessive admin skills). Patrick Clair leapt on a plane with less than 24hrs notice, several of the teachers agreed to do second or third shows, Cedric’s class was moved, all of the things that had stopped working got fixed and all of the gaps were plugged. Of course, some people decided to get a refund on the class, and I understand that. Some people could not make the new timing of Cedric’s class and some people already had things booked. That’s just life, as it does, getting in the way of improv.

It was not a relaxing start to the week, shall we say. But you just get on with it. And in the end, four packed shows and 17 packed classes served up improv wisdom to a total of 280 audience members and 246 workshop participants. There was a buzz, an excitement and a sense of possibility in the air. Exactly what I was talking about in my post last week.

What was lovely about the way the team reacted to these changes (let’s call them that) was the simple, philosophical acceptance of it. Sure, months of planning and many hours of work appeared to be collapsing around us. But that is just the randomness of the universe asserting itself. Of course we were pissed off and saddened by it, but we (and I mostly mean C3Something) picked ourselves up, dusted ourselves off and did the next thing. It felt like the festival was as improvised as the shows.

Respect to Judith, Carleen, Shem, Keith and Mariana, plus Molly, Stephen and all his volunteers. That was a long week.

So, just as the best laid plans of mice and men, Slapdash went a-glay, but that was Ok. Thanks for those who helped and those who were forgiving.

I am a white cis-gendered, university educated male from Western Europe. Life is in easy mode for me and I try to remind myself of that as much as possible. And it was very noticeable that this Slapdash nearly all of the teachers were a lot like me. I am not going to try to excuse this by saying that we tried to book some people who looked and sounded less like me, because who gives a shit about trying. Festivals are large, unwieldy beasts and with the number there are in Europe now and the complexity of booking high level teachers and performers, ensuring diversity is hard. But we must do better and we will do better. Not just because it’s the right thing to do (which is a good enough reason in itself), but also because the more people who improvise, the better improv and the world will be. So next year we will do better. We promise.