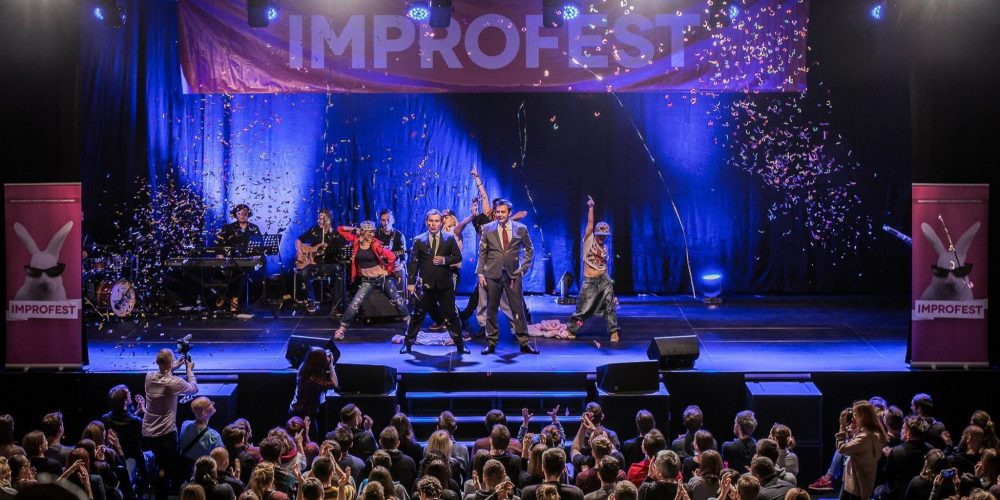 As with most improv festivals that I go to (and to my shame), I had not researched Improfest before I got on the plane. Heather got the invite, Alan is lovely and I had never been to Poland, so let’s do this. A quick check of the workshops I was teaching, buy some London gin as a gift and get on the plane. I’ll work the rest out when I get there. So it was a little surprising when our guide, Hania told us that the main auditorium could hold almost a thousand people. Would it be full, we asked? She couldn’t promise that, but it was last year. That’s a lot of people.

During the opening show, there were cabaret dancers, a four-piece band, an opera singer and glitter cannons. The closing night was also the tenth anniversary of local group AD HOC, and (after the 25-piece choir singing Ode to Joy) they spent the show reclining on the stage dressed as medieval monarchs receiving gifts from other troupes and attended by (no word of a lie) a bishop and a jester. It sure felt strange in the middle of all that straight-out ambition to shamble onstage in jeans and a shirt and do some make-em-ups.

And what made it even stranger for us was that all of the festival apart from us and one other show (David Razowsky and Jonathan Pitts) was in Polish. And that’s not me being anglo-centrically culturally imperialist. Most festivals I have been to have teams from a few different countries, quite often playing and chatting in English. Improfest was just two yanks, two Brits and about ten Polish teams. Every other word in every other show, including our intros, was in Polish. From the audience’s reactions, the improv was very good, but our level of understanding was at the level of. ‘Are they playing lungs and he’s the heart? Oh, it’s all set inside the human body! I think. Is it?’. (We asked later and it was.)

Put those two things together and you have something very lovely: a rich and varied improv scene where we had heard of only one or two of the teams before, and who are famous enough in their country to book a 700-seater and sit onstage dressed like kings. Oh yes, and the owner of one the Kracow football teams turned up to give them a signed ball.

I haven’t been to a lot of festivals this year and coming to one like this after some time of not going to any gave me time to think about what they are and what they are for. They take a huge amount of effort, have a huge amount of risk and don’t make any money really. Done badly, they can be like peacock’s tails, just something to show the health of the community they are attached to. A boast of health and vibrancy.

But unlike peacock’s tails, festivals do have a use. Festivals connect us to a wider improv scene. Sometimes improvisers complain that the audience is full of other improvisers, that it is the blind leading the blind. But I have no problem with that. I go to festivals to see other improv, to be that improviser in the audience, to realise what is similar and different and sometimes to have that perfect moment of ‘huh, I didn’t know that was possible. I should try it’.

The auditorium was full in the end, and Heather and I had a great show. The audience was warm and receptive and seemed to enjoy the number of times we said ‘Lubin’ (which is a different place to Lublin; long story). There’s something about stepping out in front of that many people with a radio mic taped to your face that focuses the mind, concentrates you on the task in hand. A lot of people put a lot of effort into this: don’t fuck it up.

Which brings me back to glitter cannons, opera singers and dancers. It’s easy to feel apologetic about improv, to see it as ‘our little thing’ and be self-conscious about inviting people, both that we know and we don’t. To shamble on charmingly rather than bounding on impressively. After all, we don’t know what the show is yet, we pray that it will all work out, and even with the best will in the world, sometimes it may just, well, flop. So Improfest was a nice reminder of something you need to remember not to forget: improv deserves all that pomp. It deserves uniformed staff and production values and a top trumps game based on the performers (yep, we had that too) and maybe if we use all this to tell the audience it is worthwhile, they will believe us.