Impromptu Shakespeare at the Brighton fringe 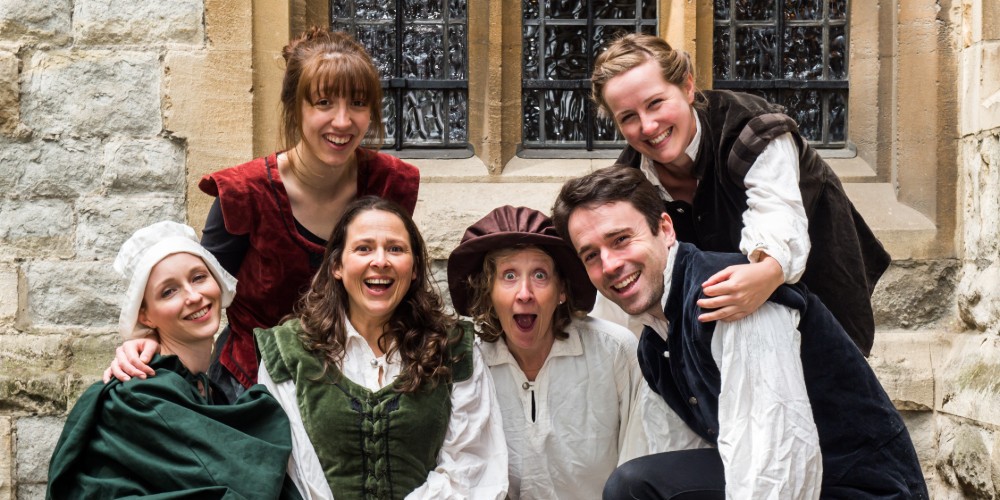 Impromptu Shakespeare received two reviews at the Brighton Fringe last week, one from Broadway Baby and one from Chortle. Before I continue, don’t worry, this is not a bitter rant against reviewers or set of ripostes. They were not the most glowing reviews ever, and although that always hurts, I think they raise valid points. I’ll be thinking about them going into rehearsal (in a good way) and as the Nursery’s new touring section sells this show and the Maydays Happily Never After to touring venues during and after the fringe. I am always interested in considered reflection on how to market and perform better.

First let me say that we (I direct and perform in Impromptu Shakespeare) had a very nice run. Four well-sold 5pm shows at the end of the month after a single show at the start gave us the opportunity to try out a new opening for the show (no spoilers, but the music is now joyfully inappropriate and the show dedicated to Dustin Hoffman). We are very happy with where the show is and are looking forward to the challenge and work out that is the Edinburgh Festival Fringe. Bring on my twenty-second consecutive Fringe.

So to the reviews. The first review to come out was the Broadway Baby one and it’s here to save you the googling. It describes the show as “thrillingly witty” and said that it “had the audience in stitches”. Pretty good, and (even better) here is my favourite pull-quote: “The knowledge and dexterity required to so well (sic), which they do, is astonishing”. I will take that and put it on a poster any day of the week. However, the review concludes with three stars and the statement that “The concept itself proves to be somewhat self-defeating: yes, the actors are very skilled, and their imitation excellent, but tackling the Bard himself is a big job and I would rather just be watching a Shakespeare play.”

In a way, fair enough. If the reviewer doesn’t find it to be her thing, then it is not her thing. But I do find it a shame that it interferes with an otherwise excellent review of a show. Not every production is for everybody, and surely one should do one’s best to be impartial, to help potential audience members to find the shows that they will enjoy, than tell people what should and shouldn’t exist.

That’s my knee-jerk reaction, but then I had a word with myself. Of course everybody wants the five stars (which we already have from Broadway Baby). No one likes being criticised, and despite not being in that performance, this show is very close to my heart. Having a word with myself got me to thinking about expectations. In the old opening of the show we would bumble on and do the typical charming improv thing. We’re going to make some stuff up for you, is that ok? It didn’t help us as improvisers, nor did it put the audience where we wanted them to be. The new opening is grandiose, deliberately pompous. Again, no spoilers, but it features Zadok the priest. And maybe that’s not quite telling the audience what they need to know before the show either.

Audiences can be cagey around improv. Will it be good? Will I be dragged onstage and mocked? Will I feel safe in the room or worried for the poor souls trying to pull a show out of their collective ass. And this makes the opening of the show essential to the experience. The first few minutes of the show teach the audience how to interact with the show, show them what they can expect. We’re not trying to be a Shakespeare show. We are an improv show with a Shakespeare skin. Maybe the opening is not quite right for that yet. Or maybe it was just not this reviewer’s cup of mead. We’ve got some rehearsal time, we’ll sort it out.

The second review was from Steve Bennett, a legendary Chortle reviewer who pulls no punches (check out this review of Slattery Night Fever) and really really knows his stuff. I was a little nervy, especially as I hadn’t done the show in a while. This 3.5 star review tells the audience to “marvel at the fact that given the demanding task of making up a long-form story that holds together, while delivering some solid laughs, this did not end in tragedy.” I will take that any day of the week, along with the note that “A robust plot comes at some cost to the comedy. however. Even if in the long term it’s rewarding to have a story worth sticking with, rather than being sacrificed for the sake of mucking about.”

I’ll take that. Impromptu Shakespeare and the Maydays are warming up to a Nursery produced Edinburgh Fringe and making our plots hang together is our focus right now. If it is slightly at the cost of the comedy, that doesn’t worry me too much. Allowing ourselves to stop and smell the roses is one of the easier things to do in rehearsal. I know I am biased, but the cast of Impromptu are some of the funniest damned people I have ever worked with, so we’ll just access that a little more.

(Bennett also describes me personally as “understandably smug” which I will take. It’s going on my website immediately.)

I don’t envy reviewers coming to see our shows. Because how the hell can you review improv? With the variation night to night, of casts, content and success, how can you know whether you saw was typical or extraordinary. How do you know what was the form and the content of the show and what was the accidents of that day’s performances. And does that matter? I have seen great improvisers have terrible days and first time students who do scenes that have had me crying with laughter. Perhaps this is the reason why improv companies that have huge successes tend to do so more by gradual, organic growth.

So Jessica (our Edinburgh producer) will scrape the reviews for good pull-quotes, we’ll throw ourselves back into our last few rehearsals before the Fringe and hold our heads high. It’s going to be our best Fringe ever and I can’t wait to get started. Understandably smug, damn right I am.

But first, off to the Mount Olymprov Festival for a week. More about that in a week’s time. I will publish that blog from a beach.