Iatregenics, or when a teacher should shut up 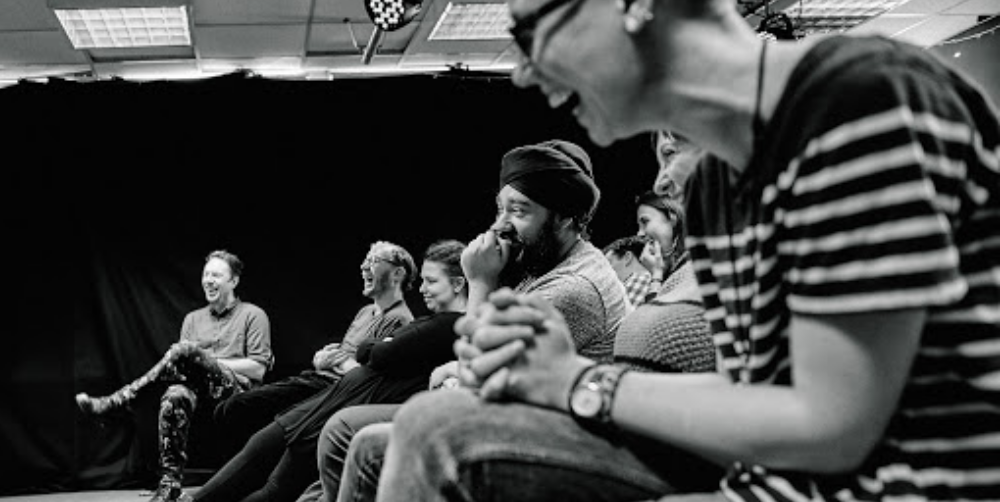 05 Aug Iatregenics, or when a teacher should shut up

At the end of a recent class, a student of mine said something that I wish more of us were able to say more of the time:

“You know, the thing I really enjoyed was: all the scenes that I did.”

I will draw a veil over their identity, but they said it reluctantly and with downturned eyes. As if delighting in their own work were somehow bad. The rest of the class laughed in recognition and then gave the Zoom-friendly hand-wiggle of BSL applause. How lovely, not just to experience that, but to notice it and then to say it out loud. Flattering myself that I am decent at my job, but should always be improving, I took the time to ask myself how I might get more people to feel, notice and even say the same thing.

There are, of course, some societal considerations which make this difficult. Our culture is both dominated by and resistant to extraversion, with some groups dominating and others consistently told to not make a fuss. We pathologise negative emotion, but also often frown on positive. “He likes the sound of his own voice” is, to British people, a damning criticism.

This is all deep and old enough that we should be realistic about our impact, but there’s another problem, and it’s something I can address more directly. Like you, dear reader, I have an ego. It comes and goes depending on the day and the situation, and sometimes disguises itself as something else (humbleness, for example), but it is firmly and definitely there. Having taken the time and effort to learn some skills, and then the further time and effort to learn to teach them to others, I like to hear that what I am doing is good. That I said some interesting things in class, nudged people in the right direction.

Yes, like all humans, I like to be told that that the world and my classes are in some small sense better for my being in it. And like all teachers, I need to keep an eye on that. When people give you their time and their money, when they turn their kids out of the living room for a couple of hours or decide that what they are watching or reading can wait, there is always a worry that it might all be a waste of time, that those efforts might have been in vain. Especially on Zoom, when feedback is muddier and our confidence hangs by the slenderest of threads. Taken away from people, unsure when we can or should be in theatres again, we feel even more strongly that we want to leave evidence of ourselves in the world, that we did good work.

But here is what I think as teachers we need to remember and then remind ourselves, and remember again one more time during lockdown. It’s just not about us. It is understandable to want to be one of those revered teachers that are mentioned in hushed tones. The big beasts of previous generations who set the boundaries within which we still we currently play, who created the art form in its current form. That ambition can drive us to do good things. But we also need to remember that many of those teachers and performers were power-hungry, abusive a**holes. I can tell you that from experience. And besides, if we make ourselves so wonderfully quotable that all students can think about as they leave the class thinking how clever we are, we are doing it wrong. They should leave thinking about how clever they are. Otherwise we are just creating an exploitative culture of guru addiction.

In medicine, there is a word for the problems caused by over-intervention: iatrogenics. And it’s very interesting, because it is as likely to come from what the patient demands as what the physician offers. After all, no one comes back from an appointment saying ‘What a great doctor: she told me to do nothing at all!’ We want our complaints to be taken seriously, which normally means treatment. That’s why people with a virus still want antibiotics. And in class, the same thing can happen. “Kick my ass”, say some students “I am here to learn!”. I am just not convinced that learning works like that.

There’s something else going on here. As improvisers, we tend to be neophilic, and as teachers, (and therefore service providers), we tend to play to that, to give people what they say they want. We overstimulate, give too much information, change the task when we could and should be doing the same thing again. To maintain a flow state, we need to make the task hard enough to be challenging, but we also need to make it easy enough to avoid frustration and that means repeating often enough for students to see their progress. No yogi complains that they did this posture yesterday. That, after all, was yesterday.

When I need to have a word with myself about this, I often think of the late Jason Chin. The most gentle of teachers, his classes often seemed like we had barely had class at all. He would hide the learning in the mechanics of the task and let the student discover what they were doing in the doing itself, often finishing his explanations with a smile and a “That’s all”. Things made to seem manageable have a way of becoming so.

So that is a commitment that I am (re-)making to myself, made necessary by the paranoia of Zoom and the underlying anxiety of the pandemic. I am going to bring less to classes, to take a breath and, in the title of Asaf Ronin’s book, stay out of the way. Explain the goal, identify the tools and then, as mercifully for myself as for others, say “That’s all” and shut up.