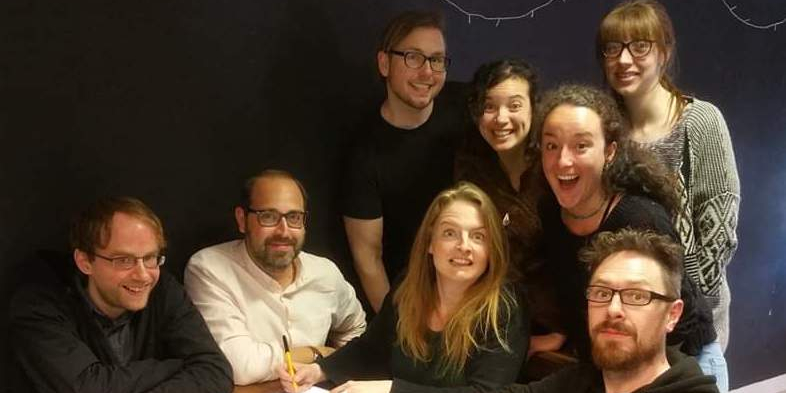 The first time we visited the Nursery Theatre Broadgate, it was a store room. Or rather, two store rooms and a dentist’s office. And what is now the bar outside was all open plan cubicles. Dressed in hi-vis jackets Jess from Theatre Deli showed us around a very unassuming space, accompanied a bored security guy and we said yes, we can build a theatre in there. Could we open in a month? I guess so. Jump and justify.

So we discovered what RAMS were, speed-filmed a crowdfunding campaign, found some theatre chairs that had been in a garage for over a decade, examined the space behind the ceiling tiles to see if we could run cables there. We sent furious programming emails, shifting #tnl over there and piecing together a season. Would we have a license in time, or have to use temporary ones and hope? What did we not know that we didn’t know?

Six weeks later, I was sitting in the building manager’s office and saying (again), yes we were opening the next day and we really really really needed them to sort out the wires dangling from the ceiling. Nearly a hundred people are coming. You have a theatre in your building now. The Nursery has always done quick turnarounds, but this one was really a very quick turnaround.

I remember how for the first month or so the deli bar wasn’t open yet and people had to come through the foyer. Yes, we said, you’re in the right place. We know it looks like an office building, but this is where the improv is at, don’t worry. I remember how hot it was before they fixed the air conditioning. I remember when the green room was still full of stuff and when the bar was just a table in the corner (only for a single week, but still).

I remember some of the improv, though in truth only a very small percentage cos that’s what improv is like. I do remember being a Russian lodger sleeping with his landlord, a British mountaineer on Everest, discussing why magic doesn’t work on the radio, discovering how much an audience member disliked her dad and running into a burning olive grove to commit suicide. I remember so many rounds of thumb war. I remember playing a very old driving instructor and a man with resting neurotic face.

I remember Armando Diaz performing there, and Dave Razowsky and Jill Bernard, and Slapdash bringing performers from Hawaii and Peru. I remember making copper sculptures for Joe Bill, hiding a body with Will Luera and not being there when Kevin Scott was because I was taking a rare holiday. I remember a flying visit from Erin McGathy and being in a haunted house show with Dummy. I remember a visit from the European improv project bringing cold war snacks and clowning. I remember improvisation with acrobatics, with robots and with the audience. I remember starting Nursery originals up again and the wonderful weirdness of the applications and how some of them because of shows. A show about animals, a parliamentary enquiry, Harry Potter, families and a lot of jodhpurs. Improvised acapella musicals, film noir, the audience chanting like they were a football crowd and a lot of cardboard boxes. I remember slow burn longform and the dungeon master controlling the show from the TV. I remember the psychedelic oddity that is The Concept gathering strength and form.

I remember working out the livestream bit by bit and getting banned in a couple of countries because of the burlesque dancer in the improvised cabaret. I remember people playing at Thursday Night Lights as their first improv experience, duos, organic longform and some very very weird concept jams. I remember the house and student house teams support for each other, the freewheeling montages and the tight Harolds. I remember the weird, the tender, the hilarious. The successful and the not so successful, the valiant failures and the easy successes. I remember being onstage with the very improvisers who made me decide to take up improv almost two decades ago and even forming whole sentences and not totally fucking the show up.

I remember when Scott Adsit almost didn’t get into the country. I remember the surprise of being Time Out runners up (next time, the Barbican, next time) and the times we were on TV.

Sure, it’s a weird little room with lots of difficulties. The sound bleeds in from the bar, and the doors are constantly being opened by people looking for the toilets. And I also remember the time the fire alarm went off in the middle of a show, and the Maydays turned it into a song, and the time when there was a car on fire outside in the street during the first half. And the time Heather and I cycled home through a storm intense enough to soak us through in the first five minutes, lightening the whole way across the river. I remember shows so busy we turned away thirty people at the door and shows so quiet the other performers were basically the audience. I remember the audience members we nearly had to throw out because they were making out so hard.

I remember the laughs, the gasps, the audiences who were into it and those desperate to leave as soon as the show finished. I remember when we really nailed it and when we just got through to fight another day.

A lot has happened etc. I can’t process or describe anything close to all of it here, but it happened with the help of and for all of the wonderful people of the Nursery Theatre. The first timers and the addicts, the bar staff and the volunteers, the managers, directors, improvisers, tech wizards, visitors and residents. The Theatre Deli staff and management, the confused Bradgate security, the builders. And of course all of the improvisers doing all those goddamm make-em-ups. But that goes without saying. Cos that’s what the Nursery is, not four walls and some chairs.

We’ll miss you, Nursery Theatre Broadgate. But we’ll be back very soon.