I read some screenwriting books so you don’t have to 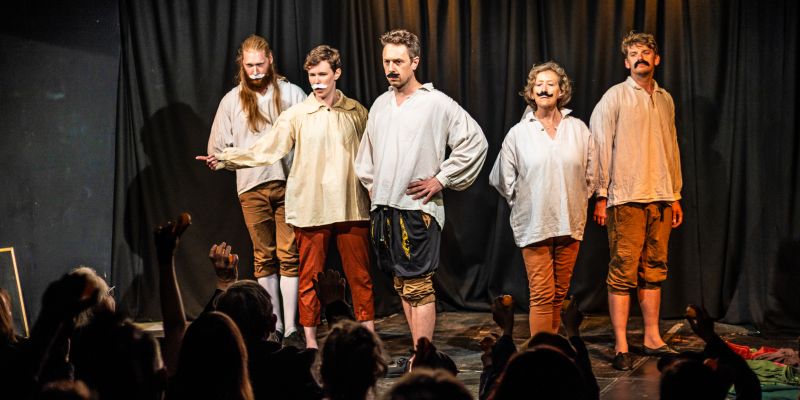 One way and another, I have been on a lot of flights recently. And on these flights a strange thing happened. I ended up reading a bunch of screenwriting books. Now please do not take this as a replacement for learning improvised narrative. The following are quick and dirty heuristics that made me look up from the book and say ‘huh’ (like Dr House). They made me think that I can add them to my narrative toolkit quickly and easily, so I thought I’d pass them on. I like quick’n’dirty tools.

(NB. On the idea of protagonists and antagonists. I use this vocabulary, but not all stories have them and not all shows need them. I am using them as a shorthand for ‘characters who recur enough to care about’. That’s just too long a phrase to repeat.)

It is common in improv to see a protagonist state openly what they want. “Ah man, I want to get out of this two horse town and get to the big city”. That helps. We know what to give them and how to challenge them. If they want to be a good person, tempt them with an easy theft to feed their starving family. If they want love, make them fall for someone impossible, inaccessible or inappropriate. That one is as old as the hills.

But. It is wonderful and surprising to watch a character learn a lesson that they were not expecting. No one wakes up in the morning thinking “I need to learn about myself”, but damn is it fun watching someone being forced to do so. And what a fun thing to be thinking in the wings: “What does this bozo need to learn?”

2 The protagonist and the antagonist want the same thing

Improv can very easily become a morally black and white world, with cackling, stereotyped bad guys that want nothing more than to watch the world burn. This may be to make sure that the audience doesn’t confuse the player and the character, and I totally get that. I don’t want people to think I am an awful person, so if I use the universally accepted bad guy voice and bad guy hunch, everybody will know exactly where they are.

But it is an oft-repeated truth that no (interesting) bad guy thinks they are a bad guy, so in order to guarantee that you clash with the good guy, simply make it clear that you want the same thing. That way there is no need to work at making the characters clash, they just inevitably will. That clash may even lead to the protagonist learning something (as above) at the climax (as below).

3 The protagonist and the antagonist have opposite worldviews

They may want the same thing, but they have opposite ways of achieving it, because they have opposite ways of looking at the world. If the protagonist is direct, the antagonist is sly and subtle. If they are emotional and impulsive, the antagonist is cold and cerebral. That humourless lunk Batman needs the joker to balance the story (and can famously never kill him). The best opposite to the dark knight’s self-importance and fierce moral purpose is an illogical anarchist. The selfless and idealistic Frodo needs a grasping selfish Golum.

4 Put your characters through hell

Working out what your characters predictable behaviours are is a very useful skill in improv. When you know how a character will react, it is easier to know what situations to put them in. Jason Shotts calls it ‘passing the note’. When I know what they will do, I can make them do it and probably make the audience laugh by doing so.

This will naturally make scenes escalate, but it is also essential to keep an eye on the whole damned show escalating. If a character needs to be the highest status person in the room, we may start with them showing how smart they are in school, but maybe we can end with them vying for status with Zeus himself atop Mount Olympus. That way we get to see what they are really made of.

5 There is a moral choice to be made

Climaxes of improvised narratives can be hard. Sure, we may have had a lovely show about the world of Formula One for example. We may have established the characters, made them clash. We may have examined the world and played some fun games, but in a show with no actual cars in it, a mimed car race might well be just a bit lame. And the chances are, we will already know if the lead character is going to win or lose. So how to make a climax a climax? Simple, it needs to be moral. If throughout the shows the protagonist has neglected their kids in order to go and race, have them finally do the right thing, stay home and be a good parent.

Casablanca is a film that you always have to mention when you are talking about films because it is a very good film. It really is a good film. And the climax isn’t a fistfight or a car chase, it is Rick deciding to stay in Casablanca to join the resistance. He chooses duty and country. He starts caring again. The climax is where the attitude of the protagonist is proven right or wrong and we see what they have learnt by going through hell. It may not be what they wanted, but it is what they needed.

Try them out, let me know if they work for you, or how they need to be modified. I will be using them all summer, so I may well blog on how they worked for me later. And, of course, if they don’t work, throw them away!

The books I read were as follows. There may be better ones, but these are the ones that ended up in my hand luggage. Three of them are by men called John, which may say a thing or two about the diversity of screenwriting historically, but that’s anther story.

The Comic Toolkit by John Vorhaus (NB, this book has some good material, but is also hella sexist in places.)

Into the Woods by John Yorke

The Anatomy of Story by John Truby