Genre, Parody and some other words 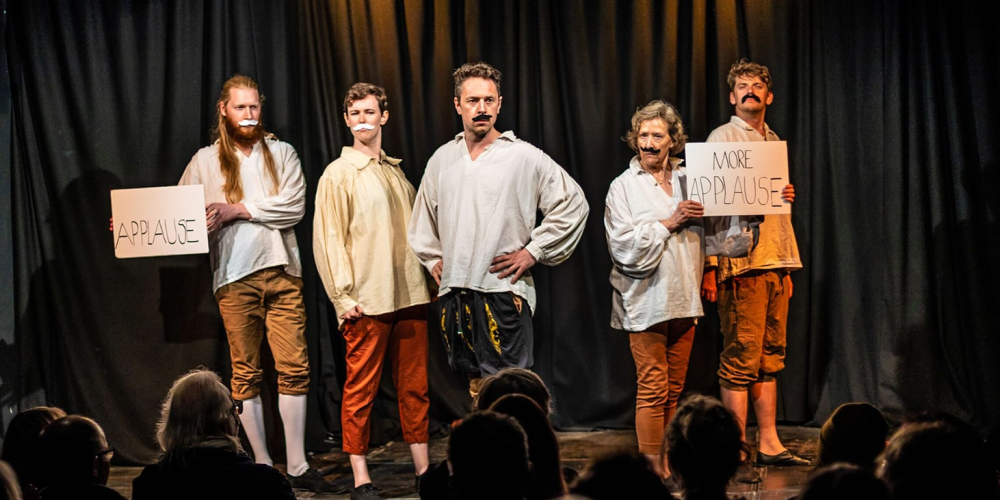 14 Aug Genre, Parody and some other words

Teaching a narrative class as I am, I have recently found myself thinking quite a lot about the gnarly old question of genre. I don’t just mean reaching for a six-shooter or miming zero-g. I mean asking how we can use genre in a way that is stimulating for both those who know it backwards and those who generally avoid TV. How can genre serve us, rather than make us feel stupid?

And like a lot of things I teach, my first thought is to name what we are discussing. If you define something, you can start to understand it. Just as a jazz musician understands what each key is composed of, we should make sure we understand not just what genres are, but what we do with them to make shows.

So this is a blog about boundaries and terms. It is, like some biology classes, a description of some types of things and the differences between them. Turn back if that sounds awful to you. Sometimes I flatter myself that I entertain, but not today, my friends. This blog is a topography of genre usage.

Because here is the thing: everything is in genre. We might not intend it, but as soon as we step onstage, we have created information which can be interpreted as genre. Some things are, of course, cross-genre, some things are combinations, or create their own genre, but as soon as you are placing humans in a setting doing and saying things, your audience will naturally form sets of expectations and another word for a set of expectations is a genre. Genres are, essentially, statistical things.

But why lay these things all out separately? Surely (says Starfire the romantic), if we feel our feelings and play out the scene, that is enough? Not really. Leaving aside the question of what ‘enough’ means, I find that it is useful to be able to identify different aspects of improvisation in order that we may learn them well and play them together. We may make a genre decision when we conceive a show, or at the start of a performance. We may discover over the first few scenes. We may trip from one into another, find that one delights us or frustrates us. But like language learners wrapping their tongues around the phonemes of an unfamiliar language, until we build the categories in our heads, we will smudge them together.

I would like to reassure the reader that there is no test at the end.

A genre is a cluster of ideas, settings, characters, expectations that have been placed next to each other frequently enough that expectations are created. There is of course, no definitive list of genres that we can learn, but thinking in terms of them can be very useful for improvisation. Deciding on genre usefully reduces the number of options available to the player, suggests the texture and emotional content of the piece, and gives the audience a map to navigate with.

An example: a young woman in New York tries to get to the office on time on a rainy morning. Her heel breaks, as does the clasp of her new briefcase and then she gives the wrong directions to the cab driver. Oh dear! This is probably the start of a romcom. We probably expect her to meet a love interest, that they will struggle with circumstance or each other, but end up falling in love. There is nothing that prevents her fighting an army of twenty foot robots, or discovering that she has a rare terminal illness, but we would be more surprised than if her new boss had a square jaw and piercing blue eyes.

Genres are statistical things. Or more precisely, they are stochastic. Which is to say they are statistical, but not precisely predictable. If in the first scene of a film, we watch a nerdy scientist knocking over a beaker as they leave the laboratory, it is more likely that a chemical will spill into another beaker and create a compound with remarkable properties than we will follow the cleaner and their struggle with the frustrations of employment law. Unlikely, but not impossible. It is, of course, fun to set up one set of genre expectations and then play with them (see my previous blog on why narrative improvisation matters). Giving our single girl in new york the opportunity to kick robot ass undercuts the patriarchal and heteronormative overtones that many romcoms have.

A parody is a piece within a genre which mocks that genre itself. Think Scary Movie, Space Balls or American Vandal. The targets of the humour are the excesses and cliches of That Kind of Thing. It seeks to show how restricted we are when we repeat, how we become bound to something and restrict the possibilities.

But how many times can you improvise the torture games of the Saw franchise? Or the endlessly empty tension-building of reality TV? In the end, if you are only parodying you will find yourself narrowing in on the best way to dissect something. Parody often leads to smugness, repetition and its own demise.

Personally, I find parody to be dangerous improvisational territory because most of the time it is better written down than made up. Unless you and all of your cast are so deep sunk in a particular form that you can effortlessly play the classics, you can find yourself either short of ideas or, like an improviser playing an older person by miming a zimmer frame, snarkily stereotyping. I love parody, but for my money, keep it written, keep it short, or mix it with something else.

In satire, the target is not the artwork itself, but society. Satire exaggerates to expose, makes things familiar seem unfamiliar in order that we can see and laugh at them for what they are. Gulliver’s tiny Lilliputians, for example, mock the pettiness of politics. Satire uses genre in order to create distance from its subject, but it is genre as tool rather than genre as goal. The butt of the joke is people, not art.

Satire is safer ground for improv, but it can still be hard to pull off. It requires political unity among the players and an ability to map and apply what is happening onstage onto real life. The technical challenges of this can make improvised satire seem heavy-handed and, on occasions, cruel. And even at the best of times, it is hard to write it without the feeling that you are just preaching to the choir. Few people have ever had their minds changed by satire.

If genre is to be a delightful stimulus rather than a suffocating restriction, we must create a relationship with it which serves us. This brings us to the uses of genre which I think are most useful to improvisation. By which I mean most fun to me. If the above areas are what you do and it brings you joy, then you do you!

4 and 5) Homage and Pastiche

Homage and Pastiche are two sides of the same coin. By creating in this way, we both celebrate and delight the genre they are played in. (After all, why would you say “I hate space opera. I am going to make a space opera”?). The difference is that homage is a serious attempt to create within the genre, pastiche a light hearted honouring of it. They express the same love in different ways, but if homage is a heartfelt love letter, pastiche is a home-photoshopped valentines card. Both respect the audience’s expectations, but they build and create rather than snarking.

This is probably the reason for the huge success of the musical-improv-juggernaut the Showstoppers. Many of the audience are not there, I do not think, to watch improvisation. They are a musical theatre audience excited to slide from awe at a perfectly structured Sondheim to shared ironic jazz hands at the Abba number. Homage and pastiche blending and balancing each other. Mixing plain silliness with technical virtuosity is a powerful combination.

A note on intellectual property

Literally and figuratively, here be dragons. There is a great appeal, of course, to taking a world that you know and love and improvising in it. An improvised West Wing? Sign me up! But there is a danger. If you improvise in a world, you have to know it as well as your most informed audience member. And you probably won’t. I tried directing a Harry Potter show and, though it was fun (it was a lot of fun), it can be hard to find space in the world. You are always in danger of changing a major plot point and, like a careless time traveller treading on a narrative butterfly, destroying the world you knew. You might alienate your audience, or, worse, leave yourself uninspired.

I have made my preferences clear, but that doesn’t mean I am right. Do whichever one of these makes you happy, just know which one you are doing.