Match Report: Why being Devoted and Disgruntled is a good thing. 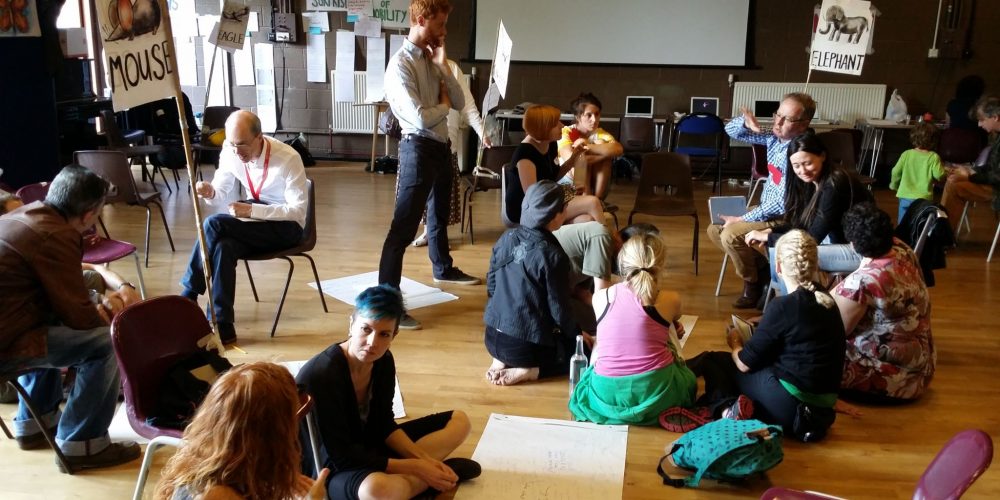 27 Jul Match Report: Why being Devoted and Disgruntled is a good thing.

Last Thursday I went to something called a D&D. No, not the table top role playing game, but Devoted and Disgruntled, an event run by Improbable Theatre Company where theatre people from different disciplines can come together to discuss what they do, why and how. And this was an improvisation special.

Improbable have a very special place in my heart. When I was at university in 2001, I went to see their show Lifegame, an improv show where a randomly chosen member of the audience is interviewed and then scenes from their life play out onstage. Then I went to see it again, and again and again. I still get shivers down my spine when I think of the story told onstage by the guy who cleans the windows at the national. As he recounted the first evening he spent with his wife, two improvisers got up and very simply played it out. At the point where they kissed for the first time, an improvised paper swan flew past. I had no idea what this magic artform was, and it took me five years to find it, but Improbable are the reason I started improvising.

A D&D is something like an improvised conference. When you arrive, the space/time matrix (timetable) is blank and the attendees ‘call sessions’ on the topics they want to discuss. There is a question for the day, but no obligation for everything to fall strictly under that umbrella. Whatever is live in you is the right topic. And you don’t have to stay anywhere any longer than you want to. In fact, the law of two feet demands that if you are not contributing or learning, you move on to a place where you are. You create your own experience, seek out the people and the conversations you want to have. It’s fluid, exciting, and creates many great conversations. It’s very much my kind of thing.

Now the title for the day (which as I said is only a jumping off point) was ‘The International Institute of Improvisation – What could it be and what should it do?’. The iii is at the moment little more than an idea and a lecture given by Lee Simpson at UCL recently (coincidentally the university I was attending when I first saw Improbable play), but it’s a big idea. But in true Improbable style, they haven’t decided what or where or how yet. And in true Improbable style, I am sure it will be wonderful.

Over the course of Thursday, I attended a session on the use of improvisation in drama school training and talked with the head of Central School’s Advanced Theatre Practice about how to make improvisational thinking part of the core of a programme rather than tacked onto the end. I went to a session run by Matilda from Improbable about women in improvisation and what can be done to make them feel more welcome and empowered. I chatted with Lee at a tiny session about who else should be invited to a conversation about an International Institute of Improvisation. I saw the two or three people who are at every D&D, along with people who spend their lives improvising and people who had just started. People who improvise in dance, therapy, theatre, music and disciplines I had never even heard of. Oh, and Phelim’s four-year-old son Riddley did the introduction almost word perfect after his dad. A lot of things happened.

I had to leave an hour before the end of this D&D, to coach the Nursery House Team for the evening, and I saw sad to miss the closing circle, as a lot of interesting things come out of them. But I was left with two thoughts.

The first was this. In introducing myself to people there, I found myself asked what form of improvisation I did. I sometimes found myself saying I was from the comic/theatrical fields of improvisation, sometimes from the American/Canadian tradition,sometimes just improv, but I was never comfortable with any of these descriptions. I sometimes wish that what we did had a more defined name. You can improvise a meal, or a childcare plan, or a Sunday afternoon, but none of those things are the improv. You can also do contact improvisation or have an orchestra accompany a child playing the drums, but these are not part of what I do. In the Improv that the Nursery does, and Hoopla, and the Spontaneity Shop and the FA and many others, there are conventions and traditions and expectations which don’t make it any less improvised, they just create a shared territory in which we can all play. (I should stress here that I am not being disrespectful of any other forms and applications of improvisation. I love an unplanned afternoon, and here is the child and the orchestra if you haven’t seen it. But they do not fall within the art form that I would define as my own.) But in saying some things that it isn’t, we should be able to say what it is, right? And I can’t. I can’t even define what it is that I do. I found that interesting. There’s probably another blog post to come on it, and if you have a great solution, please email me

The second thought was a very clear idea about what the iii could provide. And it’s this: Validity. This was the most common question I heard over the course of the day was how to change a public perception that improv is under prepared, sloppy and just, well, not real art. Especially in the UK, improvised anything is often seen as half finished. We like things to be old, and created by people who have furrowed their brows and destroyed their sleep and human relationships for the sake of perfection. People who have sweated and suffered so we don’t have to. As a culture, we are inherently suspicious of the instant. After all, how do you know if something is good if you just made it up? I think it’s close to being a common ground among all improvised arts, and what’s more, it’s desperately important, because that’s how you get audiences and therefore cash and recognition, and those things are what allow you to make better work. Having an organisation which asserts the value, beauty and truth of something which is made up on the spot seems like a noble and wonderful task. And a hard one.

As for the how, well, Lee and Phelim, I leave that up to you. But if there’s anything we at the Nursery can do, just let us know.